It was brutal.  Even at it’s best, the drive to or from Myrtle Beach is lengthy – around fifteen hours.  Our drive home was, unfortunately, much longer.  We were in the car for eighteen hours.  In the pouring rain.  With a cranky toddler.  Who only slept for an hour.

Initially, it was fine.  Not fun, because the ride home from vacation never stacks up to the ride to vacation.  But we were managing.  Early on, Justin and I discovered the importance of a hot Krispy Kreme donut (how can I possibly eat anything else ever again?).  Robbie lectured on the finer points of coffee. 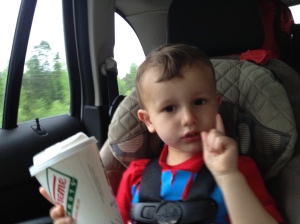 We listened to Born to Run, and it took everything I had not to tell Justin to pull over and let me run the last 750 miles home.  After all, if the crazy people in the book could do it, so could I.  And it might be better than our drive.

Did I mention the traffic?  We were in a jam for nearly 200 miles.  We saw all of Virginia, Maryland, and Delaware in excruciatingly slow detail.  We passed nine car wrecks, one of which had a hole in the windshield.

When we finally pulled up to our house, it was 12:30 Monday morning.  The rain was coming down in torrents.  Our car was packed to the gills, with at least three trips worth of items that actually had to come in that night.  Oh, and our lovely child was wide awake and screaming.

Robbie proceeded to lose his mind for the next half hour.  He started screaming something about “Don’t touch QiQi!  DON’T.  TOOUUCH. ME!”  And after that, he lost us.  He may have actually been speaking in tongues.  And then, just like that, he slid off our bed, went into his room, and fell asleep.  If only we’d known it would be that easy…

Unfortunately, I wasn’t able to go to sleep so easily.  When I finally did drift off, I had that terrible driving dream.  You know, the one after you’ve been driving in the pouring rain in the dark for hours and are tired and keep trying to shake your head to wake yourself up?  Except you’re not driving; you’re trying to relish the four hours of sleep you need.  Fail.