Today was overcast and, eventually, rainy, ruling out the beach.  Not wanting to sit inside and stare at each other all day, we headed to the aquarium.

We even visited a few dinosaurs.  Once he was finished being terrified of the t-rex who roared in his face, Robbie managed to give him a high five.  He dug through some ancient artifacts, too.

And then, after an hour, we were done.  Robbie had run around the aquarium seven times.  He had stolen the same ray gun from the front of the gift shop fifteen times.  So, to keep ourselves from teaching Robbie to swim with the sharks, we headed out to the boardwalk.

There were some old school rides, and Robbie got to take a spin on the carousel.  Unfortunately, he wouldn’t ride any of the animals.

And a few other rides. 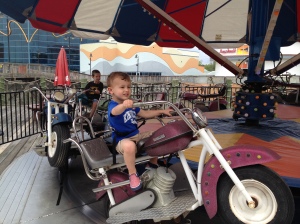 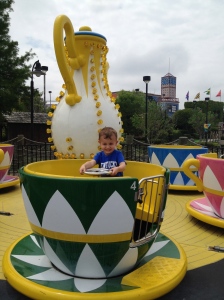