For the past few months, bath time has been a battle of near epic proportions.  I say it’s bath time.  Robbie tells me he doesn’t want it.  Some nights, he approaches a full-on tantrum.  And washing his hair and face?  Forget about it.  Justin and I do the best we can to throw some water and soap on his head, get a few good scrubs in, and throw some more water over him with only minimal tears – on anyone’s part.

So, it would make sense that, last week, I gave Robbie notice that it was almost bath time.  The water was running and he was finishing up an episode of Dinosaur Train.  There were still about three minutes left in the show, so I said, “Robbie, it’s almost bath time”, and sat down to finish my turn at “Draw Something.”

All of a sudden, I hear little feet move away from me and tear down the hall.  There was laughter, and I braced myself, waiting for him to stop.  The next thing I heard was a splash. 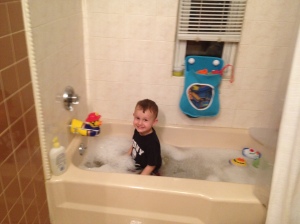 Running at break-neck speed, I  got to the bathroom too late.  My child, in the tub.  With all of his clothes on (fortunately, I had taken off his shoes).  And there was nothing I could really do except laugh.  After all, he’s probably only going to go flying into the tub with his clothes on once, right?

The very next night, Justin ran bath water and came in to tell Robbie that it was almost bath time  before sitting down to check his email.  I was reading in the other chair.  Then, before we knew it, Robbie was running down the hall.  Before we could even react, we heard the telltale splash, looked at each other, and groaned.  And then realized that he still had his shoes on.