I’m sure they’re supposed to be fun. I mean, who doesn’t love a good road trip with an almost-two-year-old? And, true to form, ours was full of excitement. And Elmo. Lots and lots and lots of Elmo. A good twenty hours worth. On repeat. And there was more. So much more. 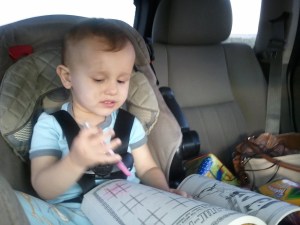 The weather was gorgeous. Robbie was placated by Elmo and his new coloring book. Justin and I hadn’t heard it enough for it to be jarring just yet. Barkley was well behaved. Traffic was light. Things were good. Really good. Great even. And then we hit New York. And stayed. For three freaking hours. Yes, that’s right. It took us three hours to drive through the city. Fortunately, Robbie stayed calm and made at least that part bearable.

Suddenly, the traffic cleared, and we were off. And still what felt like a million miles from home. Justin and I tried our best to tune out Elmo. We tried to trick Robbie into watching another movie. We turned up the radio. We did it all. None of it worked. Even when he took a nap, we had to leave that blasted DVD on because as soon as it was turned off, he woke up crying for Elmo.

At 8:45, we had a wake-up call. I was on the phone with my mom when it happened. I felt the car slow down and was sure our engine problems were back. Justin motioned toward the windshield, and I saw it. The deer. In the middle of the interstate. It jumped part way across the road and then turned around and came back toward us, headed straight for the car. Justin braced for impact as I stared the deer in the eye, panicked about how this was all going to play out.

And then it was gone. Nowhere. And we were safe. Nothing hit the car. No one was injured. Just like that, she was gone, serving whatever wake-up call she was intended to (I’m going for a “don’t-ignore-the-little-details-for-the-sake-of-the-big-picture, but you can take from it what you will).

We made it as far as we could, but by the time we rolled into Charleston, West-by-God-Virginia, Justin and I were done. So was poor Robbie, who’d been crying about his booboos from the car seat for thirty minutes. We realized he was running a fever, and Justin set to work rubbing Robbie’s feet, which had become swollen after sixteen hours in a car.

After learning that the first hotel we stopped at was full (Seriously? On a Wednesday? In West Virginia?), we found a Residence Inn with openings and piled into the bed. All of us. Justin. Robbie. The dog. And me, on the very edge. Robbie, despite his sheer exhaustion, took care to tuck Justin and myself in for the night before laying down. He handed Justin Cookie and lovingly gave me Moo. Then he offered Elmo some milk (I still need to check to see if that soured) and laid down to go to sleep.