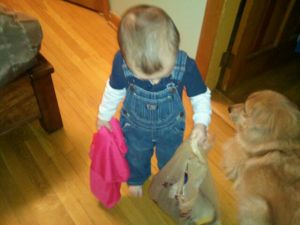 I’m really not a terrible wife, but it’s been nice to have a few days that’s just Rob and me. We kind of have a nice thing going. And I like control of the TV. And the fact that the house will stay clean. Plus, it’s nice to have a chance to miss Justin a little.

Our morning started off with Robbie looking to help again. He got my gym clothes together in a bag. And then took them out and threw them around my bedroom. As soon as I had them re-bagged, he told me he wanted to help and carried the bag across the street to the grocery store, around the grocery store, and halfway back across the street. And then he dropped the bag as traffic was coming in both directions. 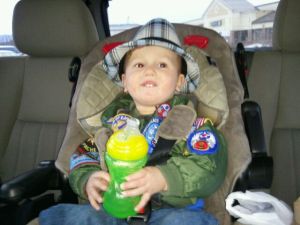 After daycare pick-up and a quick trip to the gym, Robbie and I went to the BX on base to look for Justin’s birthday present (no luck). We bought some diapers, pajamas for Roberto, and a new hat. I saw it about the same time Robbie did. He was so excited that I couldn’t help but put it on his head to see how it looked. For $5… And knowing that we’re getting ready to go on a cruise… And Robbie would surely need something to cover his little head… So, we bought it. To pay me back, Robbie carried both bags of purchases to the car for me. And from the car into the house. When did he get big enough for this? I kind of like it.

Bathtime tonight was another adventure. Robbie has learned how to let the water out of the tub, so he soaks for a few minutes and then plays naked with his toys in the leftover bubbles. He’s recently discovered that he likes to run around naked. And, sometimes, you just need to get a snack before you can get your pajamas on. Wh can’t respect that? There were cuter pictures, but I know future Robbie will appreciate not having his bottom plastered all over the Internet.