Justin and I are zombies today. That’s what happens when your toddler doesn’t actually fall asleep for good until 3:00 in the morning. Since I know you’re already on the edge of your seats, I’ll fill you in.

Robbie went to bed last night around 7:30. I kept him up an extra hour because of the time change. He didn’t actually fall asleep until 10:30, even though Justin and I went to bed at 9:00. Unfortunately, this did not last long. Robbie woke up screaming at 11:30. I only had enough milk left for one bottle, which he devoured. He started screaming again at approximately 11:37. This earned Roberto a trip into our bed until 12:30. Why so short? He never fell asleep. He watched Sesame Street and then decided to use me as a trampoline. In my tired stupor, I took him back to his crib where he screamed until 1:00 in the morning.

We all fell into a light sleep, somehow knowing it wasn’t meant to last. And it didn’t. Robbie woke up again (screaming, of course) at 2:00 this morning. I rocked him back to sleep, put him in his crib, and crept back to our room. He was screaming within 15 seconds. I told Justin that I couldn’t deal with the screaming anymore but that I couldn’t make it stop. We waited for another 10 minutes. It only got louder.

My dutiful husband got Robbie, rocked him to sleep, and brought him to bed to sleep with us. As soon as Justin laid down, Robbie started tossing and turning. At one point, Robbie’s entire torso was stretched across Justin’s face. I’m still not entirely sure how Justin didn’t suffocate. Within half an hour, Robbie popped his head up, started laughing, and proceeded to “hop on pop.” Then he tried to catapult himself over me to slide off the bed.

I was done. So done. And not at all patient. I knew Robbie was in the mood to play. But no one else in the house was. Not even the dog. Putting him in the crib would only result in screaming, which I knew my fragile mental state could not tolerate. So, I did the only thing I could think of. I took the mattress out of Robbie’s crib and put it on the floor with his blankets. I told him he could play or sleep but that I was done with him until 6:30 in the morning.

This is what I found when I woke up at 6:41 this morning (my alarm goes off at 5:55, but a certain toddler turned the volume off on my radio): 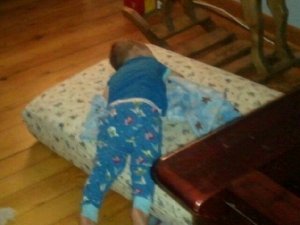