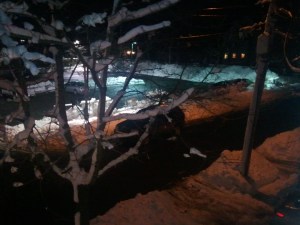 I’ve been looking forward to this weekend forever. Well, for at least two weeks since I made the plans. We were going to drive to Hanover, NH, tonight to spend the night with some friends. Justin was going to go skiing tomorrow morning with some other friends. Then we’d spend the night at their house and come home Sunday afternoon.

Oh. You noticed all of that was in the past tense? Robbie and I got home just after 4:00 this afternoon, and I hustled to get everything packed and ready to go. Then I got the text from Justin at 4:45 that he was still at work. No early escape. No leaving the house by 5:00. Then I got the call at 5:20 that he was still on the Pike. And the 6:30 call that he had just made it through the tolls. He walked through the door at 6:59 after four attempts to pull the car into our icy driveway.

Fortunately, I had given Robbie dinner and a bath, loaded the car, and let the dog out. We were ready to go. I just had to return a movie to the Redbox across the street and get some cash to pay the dog sitter. Justin loaded Robbie into the car. And we were ready to go. Until Justin tried to start the car. It didn’t. Not even a little.

So, back inside we went. Robbie went to bed amiably. It took the tow truck two hours to get here. And it was just the battery. The very corroded battery. So, the tow truck driver followed me to the Citgo to drop off the car (easier than loading it onto the truck) and brought me home. The lovely gentleman at Citgo didn’t seem thrilled that I was leaving my car there overnight and told me I’d need to pick it up in the morning. Even after I explained that I would be leaving for New Hampshire at 6:30 in the morning. He told me I could discuss it with the mechanic in the morning. Surely Jack the Mechanic will speak more English than this guy…

Justin and I are figuring that someone was trying to keep us from leaving tonight, and we finally decided we were going to listen. After all, we didn’t get the message after it took Justin two hours to get home. We almost didn’t get it when the Jeep wouldn’t start. But, we finally understood and enjoyed a nice night at home.

Please cross your fingers and send up some prayers that we get to New Hampshire safely tomorrow (and that Justin stays in one piece while praying). Oh, and that I’m allowed to keep my car at the gas station until Sunday afternoon (or that I have good friends who will go pick it up for me). Thanks in advance, Allie!