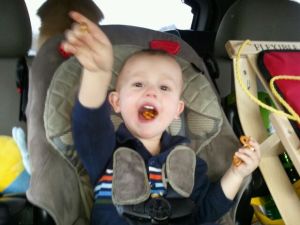 I keep wanting to take the time to have a reflective New Year post, but it hasn’t happened yet. By the time I thought about it New Year’s Eve, I’d had enough wine to be reflective but was running out of time. Yesterday I had plenty of time in the car but minimal battery power after Robbie watched enough movies to put him to sleep. And today? We’ll see… I’m just hoping to have enough energy to stay awake to blog, take a shower, and get my behind to bed.

I’ll be honest, some amazing things happened in 2009. After all, that’s when Robbie was born. But 2010 is my favorite year so far. So many amazing things happened to me last year, that it was actually hard for me to let the minutes slip by and find it over. I got a little panicked around 11:47 when I realized that I couldn’t stop time and make this incredible year stop.

One of the biggest things that happened last year was graduating from Boston College. I never thought I would go back to graduate school after finishing a Master’s from the illustrious Eastern Kentucky University. But I did. And it was amazing (partially because they paid for my tuition the first year!). The people. The experiences. In my first year, I pinched myself a few times as I walked across campus. On 24 May 2010, I walked at my first graduation since high school. Getting that degree was one of the proudest moments. I’m not sure I’ve ever worked that hard for anything in my life. And this year, Justin also started back at Boston College, making it a big year educationally for both of us.

I also got to spend a lot of time in Kentucky in 2010, something I never thought would amount to making for such an incredible year. But, things change when you have kids. For me, the change was that I wanted to spend as much time in Kentucky as possible. Before Robbie came along, I was content to go home twice a year (maybe three times). But not last year. I went home for five days in February, a week in April, ten days in July, two weeks in August, and ten days in December. I realized over the past year how much I appreciate my family and how much I really enjoy spending time with them.

It gets harder leaving them every time. Yesterday, I could barely control myself when it was time to leave. I started crying before it was even time to say good bye. And when I had to go back to the house to get the earrings I forgot? Letting go of my mom was so hard that I had to go back and hug her two more times just as hard. I don’t think you know how much you love your mom until you become one. It totally changes the relationship, and you can see everything she did for you as you’re doing it for your own child.

I started a new job this year, one of the best things I’ve done. I’m at a school I love with incredible students and pretty fabulous colleagues. It’s exactly where I want to be.

With all of these amazing things, how could I want the year to end? Surely 2011 can’t possibly measure up… But, like so many things, I cannot control time. And midnight came. And 2010 went. So now it is time to embrace 2011 and do my damnedest to make it even better than 2010. So, I have a few goals (that sounds more achievable than “resolutions”):

1. I will lose 50 pounds this year (making my appointment with Jenny Craig tomorrow).
2. I will brush the cats at least twice a week (if I write it, I have to do it, right?).
3. I will exercise at least five days a week (I’m hoping to get addicted to P90X).
4. I will focus on anything positive I can find when things aren’t going right.
5. I will do my best to relax and let life take me where it’s supposed to, especially with things I cannot control.
6. I will take time every day to play with my son and spend quality time with my husband. I will not take them for granted. 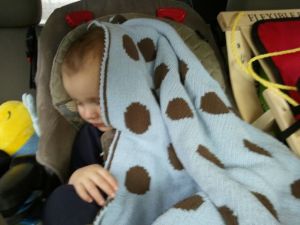 So, now that they they are written, I have to hold myself accountable. Here goes nothing, 2011. Let’s see what you’re made of!