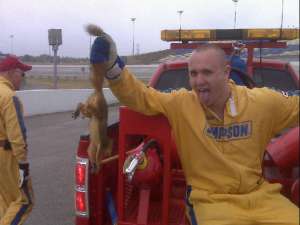 One of the best parts of family time is my stepdad, Tom. You have to listen carefully because you never know quite what will come out of his mouth. We’ve been waiting all weekend for the perfect quote, and it came tonight while watching the miserable first half of the Kentucky game (it looks more like the Auburn game, but we’ll remain painfully optimistic until the clock runs out).

The announcers were commenting on how fast an Auburn player was, regaling the viewing audience with the tale of how this particular player bet some friends that he could catch a squirrel and then did. Tom, fed up with the game about five minutes into the first quarter, was not amused with the story. From the love seat, we heard, ‎”If you caught a squirrel in your hands, your hands would be chewed off by now. That’s a lie story.” This was immediately posted to my sister’s Facebook status and responded to with a picture of Matt holding a squirrel by the tale. His caption? “I guess I’m the exception.” Apparently, it is possible to catch a squirrel with your bare hands.

The most important part of this is that we now have a new catch phrase: lie story. When I think Justin may not be telling me the truth about something, I ask if he is being a “truth teller”. I think we’re going to have to change that. I’ll now be asking him (and Robbie, when he’s old enough) if they are telling me lie stories. I’m pretty sure it will be a hit.