Christmas has always been one of my favorite holidays but never as much as it was this year.  Christmas with a three-year-old is like nothing I have ever experienced in my life, except for maybe my own Christmas as a three-year-old.

It was the first time Robbie really, truly understood Christmas – and not just the Santa Claus and gift part.  He spent a lot of time at pre-school talking about baby Jesus being born.  His class’ part of the Christmas program was singing “Go, Tell It on the Mountain”, and Robbie ran around the house for a week singing, “Go, tell it on the mountain that Jesus Christ in born!” – complete with hand gestures.

Robbie was ready for Christmas as soon as the tree went up, counting down the days on his Advent calendar and watching a Christmas movie every night.  He begged for snow, near tears when it rained two days before Christmas.  We baked cookies on four different days, including Christmas Eve.  After all, how could I refuse Robbie’s earnest request to “make children’s cookies.” 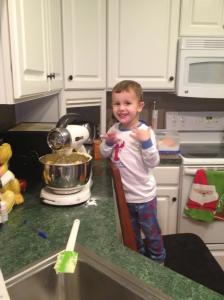 Christmas morning was, well, magical.  Robbie woke up around 8:00 and climbed into bed with us.  He wasn’t quite ready to go out to see Santa yet; he wanted to talk about it.  As I asked him if he thought Santa had come, his eyes got big and a huge grin spread across his face as he nodded his head up and down vigorously.  And then, half an hour later, he was ready to see what Santa had brought.

All month, Robbie talked about a rocket ship.  He was determined that Santa was going to bring him a blue rocket ship.  They are nearly impossible to find at the North Pole.  Fortunately, Santa was able to perform a last-minute Christmas miracle and, sure enough, there was a Mickey Mouse rocket ship waiting for him under the tree.  I was sure it would be ignored – after all, there were two train sets all set up under the tree as well.

It was the first thing Robbie went to – “Look, Mom!  My rocket ship!”  He zoomed it all over the living room, thrilled that Santa had made his one wish come true.  And, miracle of all miracles, Santa left a different rocket ship at Nona’s house – and inflatable one he could ride.  Cynical mother that I am, I figured he would toss the rocket ship aside after he opened his other presents.  But no.  At the end of the day, Robbie went to sleep with his Mickey Mouse rocket ship tucked in bed behind him.  Two days later, when saying his prayers, I asked Robbie what he wanted to say thank you to God for.  Any guesses?  His rocket ship and his dump truck.

Now, a mere six days later, Christmas is packed up and put away (ladies, don’t get jealous, but Justin did all the work himself while I ate breakfast).  But the magic of Christmas lingers on a little longer, and Robbie is still checking in to make sure that Santa is back at the North Pole waiting for next Christmas – because Robbie is ready to start his countdown again.