When I was getting Robbie ready for bed the other night, he enthusiastically proclaimed that he wanted to wear his Go Cats jammies.  He was already in a diaper and sliding right into his Go Cats shirt when he spotted it.  His Barkley jammies (you know, red footies covered with different dogs).  He had to put them on right away, over his Go Cats shirt.  Of course…  And just as we got the footies on, Robbie spied the Go Cats pants and insisted on wearing both of them.

This lasted for about an hour, until I was paged upstairs with promises that he had to potty.  As I walked through the door, I was greeted with Robbe unzipped in his footies and trying to figure out how to get it off to get ready for the potty.  After a little awkward maneuvering, he was ready to use the potty.  I left him to his business (we’re working on the concept of privacy) and headed back downstairs.

It didn’t take long for him to finish.  After all, he didn’t really have to go to the potty.  So, he ventured downstairs to let me know that he was finished looking a little something like this: 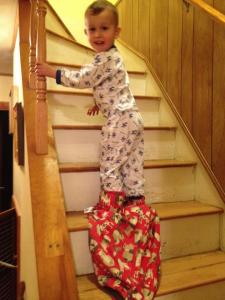 And, yes, he did sleep in two pairs of pajamas, proving me wrong when I promised that he would get too hot in the middle of the night.