Watching Robbie experience Disney World is quite possibly the coolest thing I have ever gotten to do as a parent.  Actually having the child was pretty incredible.  Being with him when he figured out Christmas was fantastic.  But Disney World for the first time?  Magical.

It took awhile before we were finally able to get to Epcot.  Fortunately, our flight got in an hour early and our hotel room was ready when we got here.  Then it was off to ESPN’s Wide World of Sports to pick up our half marathon packets (a nightmare, by the way) and finally to Epcot, where Robbie was able to realize what all the build-up had been about.

There was some debate as to Robbie’s first ride.  After all, you only get your first Disney ride once in your life.  And it has to be the right one.  Journey into Imagination it was.  As we walked into the ride, we were ushered aside by a cast member who asked if we wanted to take a side trip and see something very few people got to see.  He opened a door just outside of the line and escorted us in.  And there it was, a shrinking room!  As we walked in, the room got smaller and smaller until the door at the far end was nothing more than a window, perfect for Robbie to look through.

Once we reached the head of the line we asked to please wait for the first car, since it was Robbie’s first ride.  We wanted to make sure we did it right.  The lovely gentleman assigning seats had us wait over to the side and then held the ride long enough to take a family picture of Robbie going on his first ride. 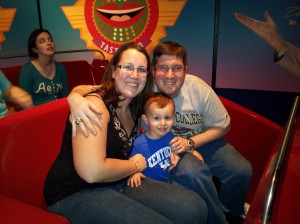 Robbie sat through the entire experience, hardly moving a muscle.  His eyes were open wide and his jaw was partially dropped.  He kept saying, “Figment” every time he saw the little dragon pop up.  From there, it was onto The Seas and Finding Nemo.  Robbie sat on the floor with the other kids for Turtle Talk (yelling, “Hey, kids!” as he approached…).  He saw manatees and rode in a spaceship.  Somewhere in there, Robbie managed to finagle his way into eating all of Justin’s ice cream. 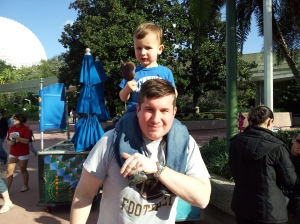 And there was even a chance meeting with Chip and Dale, who tried to steal the ice cream, too!

We had to cut our night short during dinner when Robbie lost complete control of his senses.  Papers were thrown over the ledge onto unsuspecting guests dining below us.  Silverware was chucked toward the table behind us and to the left.  At one point, Robbie had a screaming competition with himself.  You know, basically what you would expect when you wake a two-and-a-half-year-old up at five in the morning and expect him to go all day without a nap.  Shortly after dinner, he looked a little something like this. 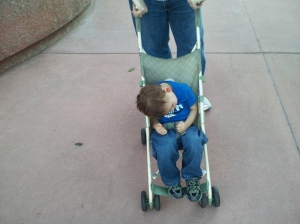 So, we opted to return to the hotel and miss the rest of Epcot.  After all, our child needed sleep.  Except he managed to run around our room like a man who had lost his mind for two hours, turning light switches on and off (I’d like to thank the person who installed light switches in the bedposts at perfect toddler height).  However, he finally passed out.

There is nothing more wonderful than the pure elation of your child, especially when you helped make it possible.  And I can’t wait for tomorrow when we take him to Magic Kingdom where he will finally really get to meet Mickey.  And then take a nap.