Robbie has been talking about Santa for days.  Weeks, even.  He points out every Santa he sees – on TV, on a balloon, lit up in someone’s yard.  Robbie knows that Santa (‘Anta) says, “Ho!  Ho!  Ho!” and that he brings presents.  However, given Robbie’s ever-changing behavior, I wasn’t sure how our visit with Santa would go.

The first time we went to see Santa, Robbie did pretty well.  He looks a little Asian in the picture, but, well, what are you going to do?  However, moments after the picture was taken, he vomited all over me.  Last year, he lost his mind as soon as he saw Santa.  The picture is classic awkward family: I am sitting next to Santa in frumpy work clothes, holding a struggling and visibly unhappy child on my lap.  Oh, and did I mention I’m hoping Robbie by his crotch?  Classy. 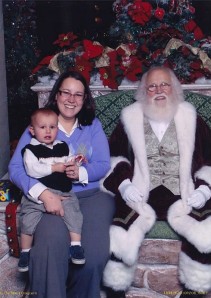 Given that Robbie had darted into Mass Ave. the day before, I wasn’t really holding my breath for anything spectacular.  However, my hopes were somewhat elevated when Justin and Robbie pulled into the parking lot next to me after Robbie’s haircut and both were all smiles.  When he got out of the car, Rob said, “Hair cut, Mom.  Balloon.”  I knew we were off to a good start bud didn’t want to get cocky.  After all, that’s where novice moms go wrong.

Our good luck seemed to continue when we got to Santa’s village and discovered only two families in front of us.  Both were still conducting last-minute spit baths and let us go ahead of them.  And then, without any fanfare, we were there. Standing in front of Santa.  The real thing.

Robbie got out of his stroller and ran towards Santa, who was holding out a candy cane (a current favorite at the Manna house).  Once i had everything situated and turned around, I found Robbie already back at my feet, proudly holding up his candy cane.  “Look, Mom!  Candy cane!  Santa!”

Panicked that I had lost my chance at any sort of picture without having to be in it myself, I took Robbie back to Santa, explaining that he would need to sit on Santa’s lap.  It might be important to mention that it was vital I not be in the picture this year.  The fact that Robbie and I were wearing matching outfits – brown corduroys and cream sweaters – would only add to the awkward photo collection, and I wasn’t prepared for that.

Robbie settled into Santa’s lap, a little wary of the patient man.  In the first few pictures, Robbie looks like a deer in the headlights, unsure of how he wound up on this man’s lap.  And then, all of a sudden, he realizes where he is.  He’s with Santa.  The real guy.  This is his chance!  And his face lights up.  And there we had it – the perfect Santa picture.

Or was it?  A few seconds later, and Robbie was trying to feed Santa his candy cane. 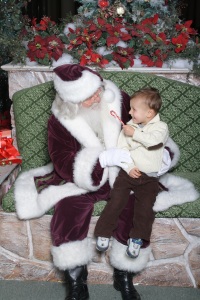 Robbie slid off of Santa’s lap, and Santa asked what he wanted for Christmas.  I didn’t ruin the moment by mentioning the traffic incident from the previous day, so I helped my awe-struck son share his Christmas list.  “Cars,” I prompted.  “Elmo, planes.”  Robbie dutifully repeated each one, never taking his eyes off of Santa.  Then, I asked Robbie if he could show Santa how he says, “Ho!  Ho!  Ho!”  Very, very quietly, Robbie whispered the words.

Then, Santa said, “Let me show you how I do it.”  He jingled the bells sitting next to him and jollily said, “Ho!  Ho!  Ho!  Merry Christmas!  That’s how Santa says it.”

And, with all the awe and passion he could muster, Robbie said, “Santa, merry Christmas!”