Ever since I was little, I’ve had horrible reactions to bug bites.  Horrible.  Welts all over my leg horrible.  And, unfortunately, Robbie has met the same fate.  At some point on Friday, Robbie got a bug bite above his left eye.  I first noticed it at the homecoming game that night when Justin asked me if Rob’s face looked a little swollen.  It wasn’t out of control, but his eye was puffy and the skin around it was swollen.  And maybe if I’d given him some Benadryl, that would have been the end of it.  But I didn’t. 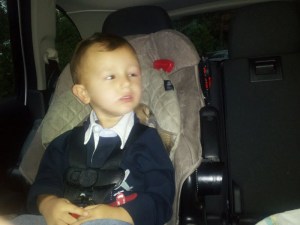 This picture was taken thirty minutes after I gave him a round of ‘cine (Robbie-speak for medicine).  When I found him in his crib, Robbie’s eye was swollen shut and he told me that he has a “booboo – hot.”  Boy, was it!  His face was on fire.  Justin and I debated whether or not we should take him to the doctor.  On a normal Saturday morning, we would have taken him.  But, yesterday we had a gun safety class (I know, I know…) at 8:30.  We decided Benadryl would be our first course of action.

Fortunately, within half an hour, he could open his eye again.  He looked pretty rough for the rest of the day.  In fact, his face swelled up so much that we couldn’t even see the bug bite anymore.  This morning, he woke up and was back to his handsome self, and I had to convince him that he didn’t need the ‘cine.  Although, I was kind of glad he thought it was good enough to want more – for several reasons.  First, cold season is right around the corner.  And second, we have some long flights coming up this week.  To answer your question, yes, I will.