Massachusetts was expecting Hurricane Irene to wreak havoc today.  Instead, Hurricane Robert made landfall on Bartlett Avenue around 9:00 this morning.  He was a borderline category 2/3 hurricane.

No one should be forced to endure 24 hours of solitary confinement with a two-year-old.  It’s a cruel and unusual punishment, particularly when you are trapped in the house.  Around 11:00, we made a brief escape when the rain slacked off.  We dashed across the street for chili ingredients and then ran to CVS hoping to find a flashlight.  Incidentally, there were no flashlights left to be purchased in the 02476 zip code.  And, when we came out of CVS, the rain was coming down horizontally.  So, there we were, Robbie in his yellow raincoat andy is responsible mother hurrying down the street.  I was prepared to duck and roll to avoid the construction equipment down the street, which I was convinced would break loose at any moment.

It didn’t.  We returned home soaked and without any further excitement.  And that was about it for Irene.  Sure, there was a lot of rain.  And there are leaves and little sticks on the ground.  And I probably don’t have to water the plants for another week.  But, other than that, no real excitement.  We lost power for less than two seconds.  And, yes, I’m a little disappointed.  I don’t want catacalysmic damage or anything, but a few intense moments where I’m not sure if the trees are going to last?  I could have stood a few of those.  Particularly if I had to be stuck inside with Robbie.

It’s probably best if I just show you the picture of how the day ended.  But, I should fill you in on a few highlights.  Two sisters from down the street came to play with Robbie around 2:30, just as he was waking up from his nap.  This provided several hours of relief, particularly when their mom came down a few hours later and we all had dinner.  But this is how it all ended: 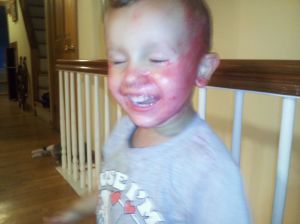 Yeah.  That’s my too-expensive-to-ever-actually-justify Yves Saint-Laurent lipstick.  He dug his little fingers into the tube and smeared the color all over his face.  I wish I’d been able to get a better picture, but he wouldn’t hold still.  And that’s pretty much how the rest of the night went.  Lipstick on his face.  Chili on the computer.  Nectarine skin dotting the floor all over the house.  Toys strewn in far-reaching places under furniture.  Water poured on the bathroom floor.

But now he’s in bed, and the house has mostly recovered from Hurricane Robert.  At least until he wakes up tomorrow morning.