Justin and I needed some time without Robbie, so we did what any good parents would do and left him with my parents for five days. I flew to New York, where Justin picked me up at the airport, and we went on a cruise to St. John, New Brunswick.

It was strange to be alone at first; it had been so long since we’d been without Robbie for more than a few hours. What in the world were we going to talk about? Would it be too quiet?

No. Not at all. It was amazing. Brilliant. Inspired. Definitely worth doing once a year. After all, as my mom reminds me, even kids need a break from their parents. And, she happily runs “Grand Camp” during the summer, wearing Robbie out to the point of him sleeping until 9:15 in the morning.

Justin sprung for a balcony, something we’ve never had in our previous four cruises. And it was so worth it. Our view from New York was staggering. 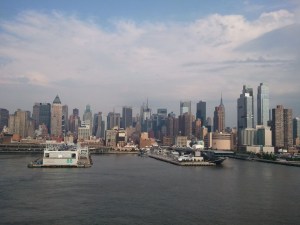 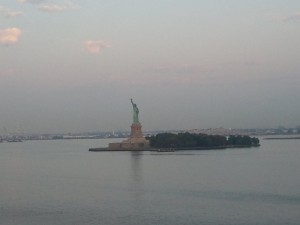 Unfortunately, so was the fog we faced the entire first day.

And the rain for almost the entire second day, our one day in port. We took a trolley tour of the city, stopping to see the reversing rapids which were, unfortunately, going the normal way while we were there. However, when we woke up from our nap (yes, nap!), the sun was out, so Justin and I took off for the hot tub on the top deck and had a perfect view as we pulled out of port.

The third day of the cruise was gorgeous. I spent the entire day outside, half of it (stupidly) without sunscreen. I know, I know… But I’d forgotten to pack any and figured the clear weather would only last an hour or so. I smartened up after a few hours and went to buy some. Miraculously, I only burned my chest.

The day the cruise ended, my flight didn’t leave until 8:00 at night, leaving me the entire day in New York City. All. By. Myself. I’m not going to lie; I was intimidated and not entirely sure that I wanted to do anything but go straight to the airport and wait. But, I put my big girl panties on and explored the city.

Justin dropped me off at Central Park, and I wandered for the better part of two hours. I made my way down Fifth Avenue, where I stopped in Saint Patrick’s for Mass and then had my make-up done at Saks. I walked to Times Square. I went to Macy’s. I moseyed and took my time. And, after twenty minutes, managed to hail a cab, which Justin (wrongly) assured me would be the easiest part of the day.