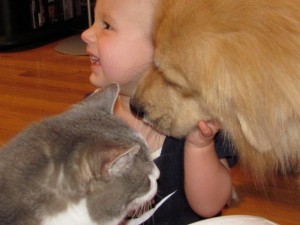 Barkley wasn’t too sure about Robbie when we first brought the baby home. He was nervous about the little alien creature who made funny noises and got more attention. It’s been interesting to watch their relationship evolve over the course of the year. Barkley still runs away from Robbie when he sees Robbie crawling towards him. I think he had just gotten used to having the extra “pet” in the house when Robbie was suddenly able to chase him. But Robbie has learned how to keep Barkley as his best friend. Food. Strategically placed food.

On Sunday, I made a huge yard sale purchase: a red, pleather, child-sized recliner. It was the best $2 I ever spent. The recliner clashes horribly with our living room furniture. And, as anyone who knows my husband will attest, Justin would never allow such a thing to enter our house, much less remain a permanent fixture in a main room. No one was more surprised than me that it has become his new favorite piece of furniture. Apparently it’s a guy thing because Robbie loves the recliner just a little more than his dad. And it has become the centerpiece for forging an even stronger friendship with Barkley.

Robbie enjoys sitting in his recliner, watching his Baby Wildcat video (yes, propaganda…), eating some chicken and bananas. Barkley enjoys this as well because Robbie is excellent at sharing. I’m not quite sure where Robbie picked up the whole sharing thing, but he has it down pat. He takes a bite of food and hands over the second half of the bite to the dog, who is strategically placed at the arm of the recliner. Sometimes, Robbie forgets to save Barkley half of his bite, so he kindly removes the food from his mouth and Barkley gingerly takes it from his hands. Tonight, however, Robbie discovered a whole new level of fun in sharing with his best friend.

Young Robert discovered that if he puts food on the seat of the recliner next to him, Barkley will lean his furry little head over the arm of the chair to get even the smallest morsel of food. This puts the poor dog in an excellent position to be grabbed by the sticky hands of an ebulient one-year-old. And the poor dog was remarkably tolerant of this as Robbie pulled at his ears, looked at me, and grinned from ear to ear.